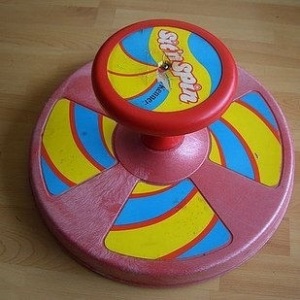 A few weeks ago, my former babysitter, Tina, joked that she would bring a sit ‘n spin to the last hurrah at our childhood home.

Ah, the sit ‘n spin…such great memories! The sit ‘n spin was a staple in every home in the 70’s, usually found in the living room, right in front of the t.v.

My siblings and I would spend HOURS on that little contraption. When it was my turn, I would stare down at the blue and yellow stripes and spin so fast, the colors blended together. What a trip!  Sometimes I would close my eyes, throw my head back and knock into any sibling or dog in my way. I was like a mini-tornado and loved every minute of it!

A few years ago, I saw one in the basement at a friend’s house and asked if I could try it out. Two notable differences this time around: I got dizzy after the first turn, and 150+ lbs takes a whole LOT of upper body strength!

It was not the same.

Luckily, my babysitters (er, I mean former babysitters) and I have our memories…

Last summer when my mom died, I immediately called and texted friends and family to let them know the sad news.

Then I messaged my babysitters.

I still cannot really explain it, but as I sat in the tiny, crowded airport awaiting my flight back home, I felt a sudden urgency to let them know. And just as they had been there for me when we were all kids, they responded immediately and were there for me again.

I was about 8 years old when my parents got divorced. Within that same year, my mom went back to school to become an R.N. and she also went back to work full-time. Because of her long hours, she relied heavily on neighborhood kids to take care of the four of us. Tina, Erin and Anne were some of our regular babysitters and they were a part of our family.

When I reconnected with Anne and Tina via Facebook a couple of years ago, it felt like we had never lost touch, although it had been many, many years.

They have memories of things that I only somewhat remember…favorite toys like the “Fuzzy Pumper Barber Shop” playdoh set and songs we used to make up and sing together.

They will probably never realize the influence they had on my life or how safe I felt when they were there. I know that we had the neighborhood reputation as being the “Benda Brats,” and we definitely lived up to the name, but they still showed up for us. Every. Single. Time.

My mom hired them out of necessity because she couldn’t be there. Little did she know that these kind, intelligent, beautiful, funny and accomplished women would be there for me again when she was gone.

Not only there for me, but willing to let me sit ‘n spin…