This morning as we watched the news about Mother Teresa being declared a saint, I turned to our daughter, Kate, and asked her the following question:

“If kindness were a color, what color would it be?”

Without hesitation, she smiled and responded,

“Yellow. Yellow is the color of a smiley face.”

A couple of months ago, I had to turn in a research paper about one component of Positive Psychology.

More specifically, I chose to explore the multi-directional and positive effects of kindness on self and others.

As the field of Positive Psychology grows, there is an increasing amount of scientific research about the impact of kindness on our overall well-being. Psychologists have found that engaging in helping behaviors actually changes our brain chemistry. Researchers have also found that receiving an act of kindness positively influences our well-being. The benefits of positive social support are even more important than many people originally thought – especially in adolescence. I look forward to learning WAY more about this as I move through the program.

But…something else really struck me as I was discussing my research topic with my dad and a couple of friends: What happens to a person’s well-being when they watch an act of kindness? How far-reaching is this effect? As it turns out, bearing witness to a random or intentional act of kindness is perhaps the most compelling of all the facets of the concept of kindness.

Over the last year, I have been contacted by numerous people saying that they have been deeply impacted by the acts of kindness we have posted on social media. Not only have friends, family and complete strangers reported feeling deeply moved, but they were also inspired to go out and perform acts of kindness themselves. I never realized it, but there is actual scientific research out there that says our health is positively impacted just by witnessing acts of kindness.
An interesting study that highlights this point was performed in the 1980’s when Harvard students watched a film of Mother Teresa caring for the poor in Calcutta. The researchers took swab samples of the students’ saliva before and after the film,

[they] showed significant increases in the protective antibody salivary immunoglobulin A (S-IgA) over those watching a neutral film. McClelland termed this the “Mother Teresa Effect.” Moreover, S-IgA remained high for an hour after the film in those subjects who were asked to focus their minds on times when they had loved or been loved”  (Post, 2009).

Based on the data, they concluded that there are significant positive physiological changes, including benefits to one’s immune system, overall health and well-being from simply watching or thinking about a person treating another with kindness, love and compassion.

The Mother Teresa Effect…a scientific explanation of what most of us have always believed – we should never underestimate a simple act of kindness...love, or the power of one person. 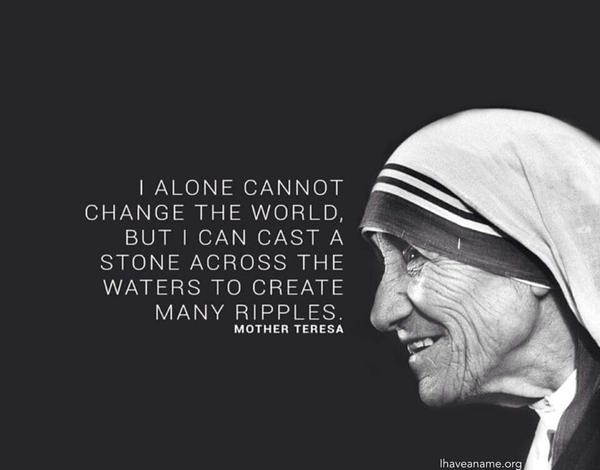 #242. Supported hs freshman football team with donation/coupon card
#241. Started recruiting process for kindness initiative at kids’ school.
#240. Packed kindness notes in kids’ lunch boxes
#238. Sent flowers to a friend to wish her a speedy recovery.
#237. Didn’t honk at person in front of me who was texting at light when it turned green.
#236. Used recyclable bag at grocery store
#235. Working with a stranger to carry out a top-secret RAK
#234. Bought glue for science teacher. We ran into him at the store a week ago and he was buying school supplies with his own money.
#230 – #233: first day of school survival kits
#229. Put a few stranded carts away in BJ’s parking lot.

#227. Let someone in traffic at awkward intersection (the person behind us did too!)
#226. Gave books to a friend.
#225. Held the door for a few people at eye dr appt (every single one said “thank you”)
#224. Threw away someone else’s garbage.
Loading Comments...