Every time I shift in my seat, there’s a distinct sound…shhhhrrp…sort of like duct tape being pulled off the roll. It is hot and humid and my chubby thighs feel like they’re glued down to the hard green seats. While I was grateful that I was able to squeeze into my cousin’s hand-me-down shorts earlier, I am now regretting my decision to choose the shortest pair I own. At eleven years of age, I am already well-aware that I am what people call “pleasantly plump” and should not have worn this outfit. I look over at my friend, Ann, to see if she’s heard the sound. From the looks of it, she has not noticed. She is completely absorbed in the game. Ann looks so cute in her colorful striped t-shirt, little blue shorts with white piping along the sides, and her too large Cubs cap pulled down so low that I can barely see her soulful brown eyes. Her catcher’s mitt sits at-the-ready on her lap. I am inspired by her ability to focus and decide to stop shifting and tugging at my shorts and watch the game myself. I copy what my friend and her parents are shouting at the players, although I am always a moment too late. They do not seem to notice. Ann and her parents are in their happy place. One of them asks me if I want a hot dog, “Yes, please.” Now I am in my happy place too. :o)

By the bottom of the second inning, I find that as hard as I try to focus, I just cannot do it. I blame the sun in my eyes, the slow action on the field. I don’t understand this game. I fold my arms across my chest in frustration. It’s so hot that the sweat collects in the creases of my arms. I unfold my arms and start fidgeting with my too short shorts again. I decide I like basketball better. Basketball players are in constant motion – more my speed, I guess. What’s the big deal about this game?

My mind and eyes wander away from the game and up beyond left field. I notice something that piques my interest. However, it is not in the ballpark; it is across the street. There are two guys holding either side of a cooler walking on top of a building. For a brief moment, I expect them to pull out their tools and perhaps grab a bucket of tar or shingles or something, to start working on the roof. I mean, why else would they be up on the roof? But, they don’t pull out tools. They set the cooler down, open up the top, grab a couple of beers, close the cooler and sit down on top of it. “What are they doing?” I ask Ann’s dad while I point to the guys. He laughs and tells me, “They’ve got some of the best seats in the house.” I look around the ballpark; there are plenty of empty seats all around us. Ann’s dad notices this, laughs again and says, “Their seats are free and the beer is cheaper.” I think I understand.

As the innings pass, I look up every once and a while at the guys who are watching the game from across the street. One had gone back downstairs and returned to the roof with a radio, which was now propped up between them on top of the cooler. The guys are throwing their heads back in laughter, slapping their knees, pacing the roof from time to time and cupping their hands around their mouths as they shout at the players. It doesn’t take long for me to realize…this is why people love baseball.

For the last several weeks, my first trip to Wrigley Field keeps playing in my mind along with so many other memories of growing up on the North Side with the Cubs – games with neighbors, high school friends, work outings, bachelorette parties, before kids, with kids, in the rain, in the cold, in the sun and in the relentless wind. There were the games before the corporate rooftop seats, before there were lights and then the fun-filled night games complete with “awkward family photo” pictures. :o)  There was the time I went with some co-workers the day before the Air and Water show…I was talking to my friend when a huge wave of cheers overwhelmed the crowd…Did Sammy Sosa hit another homerun?! My friend pointed up and there was a stealth bomber – a real stealth bomber – hovering over the field. There it was, like, almost in the field…and then, just as quickly, it raised its nose and exited. The thrill of that moment! The first and only time I saw Mohammed Ali in person was at Wrigley Field. Again, there was the deafening noise of the fans in the park, “The Champ is here!” Another thrilling moment! We were lucky to live close enough to be able to walk the four or so miles to the park on a couple of occasions, although we mostly took the “el”. Those el rides were just as much a part of the experience. One of my favorite moments took place while standing on the crowded Addison platform. I had just left the game with a then 18-month-old Emma, when an elderly woman offered her some fruit. And I let Emma take it from her without hesitation.  It didn’t matter that she was a stranger…she was wearing a floppy Cubs hat! The smiles shared between Emma and that woman…well, that’s just the way it is there. There is this indescribable feeling of human connection, a hopefulness, a beautiful pure happiness. 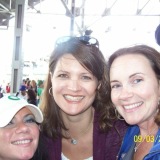 There have also been other memories…

The Cubs winning the World Series (it’s still so weird to say this!) reminds me of the people we’ve lost who would have loved this historical moment. I think of the people who took me to my first game, my Cubs AND Sox fan (yes, really!) friend, Ann, and her sweet and patient dad. I also think about my mom’s North Side pride, my grandma and my aunts and uncles in Niles. Every time we visited Aunt Betty and Uncle Harold, the set was turned to WGN and the Cubs game (or the Bears in the winter).

Most of all, I think of my brother, Brian. He loved the Cubs. When he went missing, the CPD asked for a description of what he was wearing, my sister reported that he had on jeans, a dark winter coat, and, of course, his Cubs cap. He rarely went anywhere without that cap, unless he was wearing his Red Sox cap from our dad. As much as he was a die-hard Chicago sports fan, he had an even deeper appreciation of history…and especially the underdog. He would get angry with people who jumped on the bandwagon when a team was doing well. In fact, he would probably be super annoyed that I’m even writing this, because he’d say I’m not a “real fan” as I don’t watch every single game or read the sports section cover to cover every day. And, that’s okay…he’s right, I don’t. But, I do feel connected to him and others because of this game. And, I think he’d be okay with that. Actually, I think he’d be more than okay with it and here’s why…five years ago on December 13th, I was having a terrible day (as I often do on his anniversary). I was texting my friend while walking around the aisles of Target trying to get my s@#t together. As I hit “send’ on my phone, my eye was drawn to the home decor wall. Hanging up between some Mets and Yankees pictures, was a vintage picture of Wrigley Field – IN THE MIDDLE OF TRUMBULL CONNECTICUT…ON THE DAY OF MY BROTHER’S ANNIVERSARY. I took a picture and texted it to my friend…could this be real? We both took it as a sign and I quickly put the ONE picture left into my cart. I didn’t allow myself to burst into tears until I hung it on my wall later that day. A little bit of home in our home.

All of these memories flooding my brain this week have made me feel incredibly homesick.

But then I remembered the vivid dream I had of my mom just over a month ago. I was standing in her kitchen, it looked the way it was when I was a little girl. She was sitting on “her” stool, her back was against the wall oven and she looked healthy and peaceful. I felt such a sense of calm and peacefulness too. It was the “I’m so happy, I could cry” feeling. When I asked her if I felt this way because I was back with her…in her kitchen…in my childhood home, she responded, “Don’t you feel at home in your own kitchen, with your own children?”

What was she trying to tell me?

Here’s the thing…I was always home.

It doesn’t matter where I am.

(I think this is what my mom has been trying to tell me.)

#304. Ordered a Cubs World Champions souvenir for a local pizza delivery man, who has followed the Cubs for many, many years.
#303. Sent a small gift to a friend just because…
#302. Returned a woman’s shopping cart while I was on my way back with mine.
#301. Donated leftover Halloween candy to troops serving overseas.
#300.Vanessa Rich fund donation.
#299. Picked up garbage and re-shelved some items that had fallen on the floor at Stop and Shop.
#298. “Booed” several neighbors with kids in our little ‘hood.
#297. Held the door for a bunch of people (important to note: EVERY one said, “Thank you!).
#296. Sent a small token of appreciation to a friend.
#295. Brought a dinner to a family.
#294. Sent a thank you note.
#293. Helped out with kindness challenges at kids’ school.
#292. Pushed (another) random cart back to store.
#291. Left a YAB sticker with a note on a car in parking lot with “Stella” (my late grandma’s name) license plate.
#290. Volunteered at kids’ school.
#289. Sent a note of encouragement to a friend.
#288. Gave a nice tip to some delivery men.
#287. Pushed a cart in parking lot back into store.
#286. Gave an uber driver a nice tip.
#285. Let an aggressive driver go ahead of me in traffic (and did not honk/swear)
#284. Spent several hours on prep/planning for kindness initiative at kids’ school.
#283. Let a spider go…

#256. Wrote a thank you note.
#255. Made a donation for a special cause.
#254. Picked up garbage on stairs before class.
#253. Prepped for kindness project at kids’ school.
#252. Gave a $5 Starbucks card to barrista to pay forward.
#251. Wrote another letter for TWNMLL
#250. Wrote a letter for TWNMLL
#249. Smiled and said good morning to a LOT of people this morning.
#248. Wrote a thank you note to a friend.
#247. Spent several hours devising a creative plan to accommodate 53 applications for kindness initiative.
#246. Helped put back some chairs that had been moved around at the Duck Pond.

#245. Said “Bless You” while walking passed a stranger when he sneezed (he looked up surprised, smiled and said “Thank you!”)

#243. Smiles and said good morning to a stranger.
Loading Comments...